The Bible record indicates that the history of the Jewish people clearly made them aware of the experiences their ancestors had of the presence of God in their midst. Much of that history was documented as being their God coming to them in the form of cloud language.

They had no difficulty relating terminology using “cloud language” with God’s presence. So strong was the association that it became what is known as an “idiom” in their Hebrew language and culture.

An idiom is a commonly used expression that has acquired a meaning different from its literal meaning. Idioms vary by culture and language and perhaps it would be helpful to mention a few that we use in the English language in the United States.

Do you get the picture

Some people throw in the towel too soon

It’s a piece of cake

Don’t let the cat out of the bag

Being aware of the use of idioms and all figures of speech is essential in avoiding what is known as “wooden literalism” in Bible hermeneutics. In the case of the language of the Jewish people they knew immediately from what they had heard in the Temple and the synagogues and from fellowship with each other what the expression of coming in the clouds meant. This emphatically explains why the high priest Caiaphas tore/rent his clothes in Mark 14:61b, 63 when Jesus told Caiaphas that He, Jesus, was the Son of the Blessed, and that he, Caiaphas, would see the Son of man coming in the clouds of heaven!

As lifetime students of the Scriptures we must always remember that the Old Covenant was physical in nature while the New Covenant is spiritual in nature. 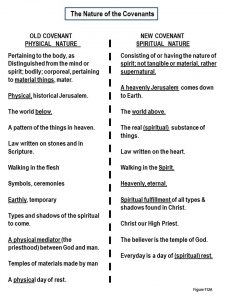 Notice the words that are underlined on the chart above. They emphasize the distinctly different natures or characteristics of the two covenants! Those who are expecting the New Covenant kingdom to be a physical kingdom are misled and misunderstanding the Scriptures! The New Covenant is entirely spiritual (in the unseen world) in nature!

The people we hear telling us of a future physical return of Christ are sadly incorrect!

Additionally, they are contradicting the Bible in a number of ways including the following passage.

“But it is not the spiritual which is first but the physical, and then the spiritual” (1 Corinthians 15:46). Although the immediate context of this passage is resurrection, this principle has multiple applications in the Bible text.

We know from the Bible that the kingdom of God:

Since the above is true, how do these people who promote this understanding expect these passages to harmonize with a physical kingdom on Earth with a physical Jesus sitting on a physical throne ruling the world from the physical city of Jerusalem?