I believe that if Jesus had told me something and along with that had told me when that thing was going to happen, I would believe that what He said happened just as He said it would whether I fully understood it or not! Believing in Christ is foundational to Christianity.

If the above statements make sense to you, then how is it that Jesus did that very thing mentioned above but yet a majority of Christians do NOT believe it actually took place? Does that make any sense at all?

All of Christianity would agree that Jesus could only be our Savior by being perfect in every way and without a blemish of sin otherwise He would be disqualified as the necessary “Spotless Lamb of God” that was required to be our substitutionary death for the sin of the world. Since this statement is an almost universally accepted fact in Christianity why is there a prominent group of Christians, that represent a majority of Christianity today, that openly disbelieves a major teaching and prophecy that He made while here on Earth as Jesus of Nazareth? That belief by Christians results in Jesus being guilty of deceiving people, lying to people, or worst of all being a false prophet which no Christian who understands the Scriptures would ever agree with. I will now proceed to explain this absolutely false belief that this group of Christians, which includes many of what are called “leaders,” are promoting in Christianity!

The statement I am referring to in all of its various forms is communicated by such language as: Jesus is coming soon! But the God inspired word of God totally dismisses this statement and expectation as being false! Is this not a huge dilemma for Christianity? Spend some time thinking about what is said in the following passages.

In the book of Matthew, the disciples of Jesus asked Him the following question: “…Tell us, when will this be and what will be the sign of your coming and the close of the age?” (Matthew 24:3b, RSV).

The disciples have asked Jesus a reasonable question and are expecting Him to supply them with a reasonable response that they can internalize and use for decisions and understanding of the future. Do you think the answer that Jesus would give them would be filled with deception, or an outright lie, or even worse a false prophecy? Any answer that has even a hint of any of the above would be totally unacceptable for Jesus to respond with! And He did not respond in that manner. Here was His response.

“Truly, I say to you, this generation will not pass away till all these things take place” (Matthew 24:34).

Let’s examine these passages closely to see what Jesus has told His disciples in answering their question. 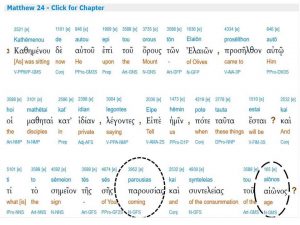 I have placed an ellipse around two of the words in the Matthew 24:3 passage. The one on the left is Greek word 3952 “parousias” which is from the root word “parousai” which is translated “coming.” The second word with an ellipse is word 165 “aionos” which is translated “age.” These two words are keys to a proper understanding of the passage we have under study. Let’s examine in detail the meaning of #3952 with an image from Strong’s Concordance/Dictionary which appears in the following graphic. 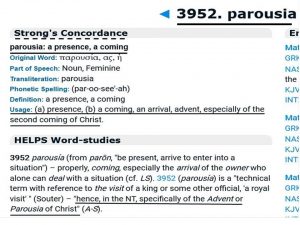 From the Strong’s definition and usage you can see that one of the questions the disciples were asking Jesus was when He was going to come back after leaving them. This event, His return, is also known in Christianity as the “Second Coming” which Strong’s has identified in its dictionary. The answer to that question which the disciples had asked will return our focus to the original statement I made at the beginning of this document: “Jesus is coming soon.”

The second word that was encircled on the verse was the Greek word #165, “aionos” which is equally important because it will be Jesus’ answer to when Jesus said He would return,  come back, “parousia.” Incidently, this word “aionos” has a very sad history in the realm of Bible translation. The translators who did the work on the original King James Version (KJV) of 1611 translated that word as “world” instead of the correct word which is “age.” world in Greek is “kosmos.” The translators were following man’s tradition rather than Bible truth! You might be thinking why is that such a big deal? The reason it is sad is that although no one knows exactly how many of the Old KJV Bibles were printed, it is estimated that it could be as high as six billion and the translation says that the world will some day come to an end! The KJV should have stated that the age (describing the Old Covenant age) would end, and it did in AD 70. But the damage has been done and has become imbedded in the minds of many Christians.

Left click your mouse on the above graphic to enlarge it.

Jesus then goes on to list a number of signs that will take place and then He says:

“Truly, I say to you, this generation will not pass away till all these things take place” (Matthew 24:34).

It is super critical that you understand what Jesus has just told His disciples! If you do not have a proper understanding of the word “generation” which is the Greek word “genea,” you will misinterpret a large portion of the Scriptures. Let’s look at that word.

“And the Lord’s anger was kindled against Israel, and he made them wander in the wilderness forty years, until all the generation that had done evil in the sight of the Lord was consumed” (Numbers 32:13).

“For David, after he had served the counsel of God in his own generation, fell asleep…” (Acts 13:36). We can determine how long David served by reference to 2 Kings 2:11. “And the time that David reigned over Israel was forty years…”

“where your fathers put me to the test and saw my works for forty years. Therefore I was provoked with that generation…” (Hebrews 3:9, 10).

A biblical generation is defined as a period of forty years. But the length of a generation is actually irrelevant in this particular case because we certainly would never agree that it was to last for 2,000 years which is what a person is saying when they say Jesus is coming soon. Jesus was speaking to a specific group of people (the disciples) and He was answering the question they had asked as to when He would be coming back (Parousia, Second Coming), and His answer was that He would come back within the generation that existed at the time He was answering them — it would take place during their generation! If Jesus did not return during that time frame, as some Christians still believe today 2,000 years later, then Jesus is without any credibility and we may as well throw out all of Christianity! But Christians know that Jesus was not deceiving them, or lying to them, nor was He giving a false prophesy!

Here is some additional truth about His Second Coming.

“For the Son of man is about to come with his angels in the glory of his Father, and then he will repay every man for what he has done. Truly, I say to you, there are some standing here who will not taste death before they see the Son of man coming in his kingdom” (Matthew 16:27, 28). If you still believe that Jesus Second Coming has not yet taken place you are at serious odds with the inspired word of God! In order for your understanding to be correct, one or more of the original disciples would have yo be still alive today because that is to who He was speaking to at the time He made that statement(see verse 24). 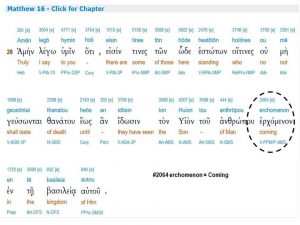 In addition to Parousia being used to describe the Second Coming, here we have the word “erchomenon” also being used. See the details on the next chart. 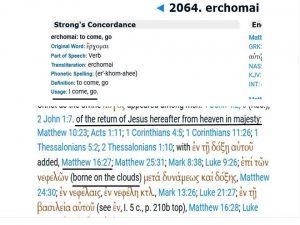 There are numerous “signs” that were given to the disciples by Jesus to inform them of the Second Coming during the lifetime of some (at least one) of the disciples. Each of these signs may be explained by a detailed study of the bible and the historical writing of Josephus, the Jewish historian of that era of time. but these are irrelevant because whether you understand all of the additional signs or not, you must deal with the answer jesus gave His disciples as to the timing of His Second Coming. If He told the truth to His disciples, and we Christians know that is factual, how can Christians today still be saying that Jesus is coming soon! If you do not grapple with this truth until you accept it you are believing a falsity about Jesus. In effect you are saying that when He came to Earth as Jesus of Nazareth for approximately 33 1/2 years that He was a failure annd that is unacceptable!

It might be helpful to read of some people who fell into the trap of believing that Jesus did not come back as He told is disciples He would. Read the following. 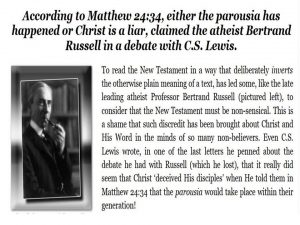 “The apocalyptic belief of the first Christians have been proved to be false. It is clear from the New Testament that they all expected the Second Coming in their own lifetime. And, worse still, they had a reason, and one that you will find very embarrassing. Their Master had told them so. He shared, and indeed created, their delusion. he said in so many words, This generation shall not pass till all these things be done. And He was wrong. He clearly knew no more about the end of the world than anyone else. This is certainly the most embarrassing verse in the Bible.”

From the above you can see that Lewis was just as confused as tose today that say, Jesus is coming soon! In addition, Lewis believed the Bible translation of the Greek :aionos” to be referring to the world instead of the Old Covenant age as explained above. I also believe that Lewis had no understanding of the two Bible covenants because he used the words “New Testament” in his writing when he should have known that it was the New Covenant and NOT the New Testament.

Those who insist that Jesus is coming soon are stuck in the tradition of man that has infiltrated Christianity requiring that Jesus return physically, but the text does not require any such thing! His return was a spiritual return and He lives today in each and every person who believes! How wrong are they in following the traditions of men rather than the word of God, and in this case directly from the mouth of Jesus! 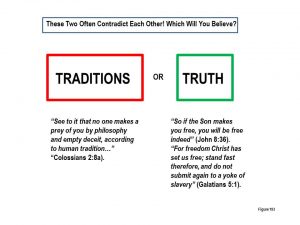 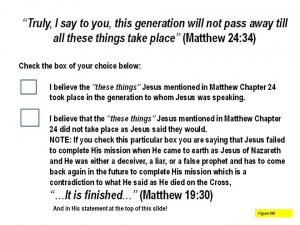