Have you ever had the experience of observing a person who says they are a Christian doing some physical act that in your view they should not be doing if they are Christians? I think most if not all of us have had this sort of experience if we be truthful. What surprises me the most is that the Bible has scripture that speaks to this very experience in a very big way!

The verse above has so many facets to it that it amazes me. The first principle I derive from it comes from the statement that a change has been made indicated by the use of the words “henceforth” and “from now on” language. The change is then clearly articulated to us as we are to no longer know anyone in the flesh or from a human point of view. Well, that really throws a monkey wrench into our judging other people by their outward physical behavior!

The New Covenant, and more precisely the person who is a new creation in Christ (see the very next verse, 2 Corinthians 5:17), and now the New Covenant believer no longer looks at what people do (their actions of the flesh) but rather of who and what they are, and there are but two kinds of people in this respect. The two groupings are (1) they either are believers, (2) or they are non-believers. Stated another way they either have eternal life, or they are eternally lost. They are either unregenerated, or they are indwelled by Christ and their Spirits are perfect in God’s view as they have Christ living in them. This is what Paul is strongly advocating in this passage.

A logical question to ask at this point would be why is Paul advocating such a dramatic change in how the believer (new creation person in Christ) views the people in the world? If you have been following along the sequence of Learning Activities on this web site you most likely already have the answer to this question. In past Learning Activities we have discovered that the believer who is a new creation in Christ has been made totally acceptable to God by the completed work of Christ! Christ now indwells each and every believer and that believer has been declared to be pleasing to the Father. By biblical fact, we have already seen that the Father looks upon the believer and sees that person just as if He sees the Son – perfect in all respects not even remembering the believers sin nor accumulating any sin to the believer! If God views the believer in this manner, and He does, you can see that God would want believers to view all other believers in the same manner. That is possible and in fact expected as we have seen already in the 2 Corinthians 5:16 passage.

I think at this point we should take a closer look at this “new creation in Christ” that we believers are.

The verse above contains two occurrences of the word “new.” In the Koine Greek language there are two Greek words that can be translated as “new” but they have drastically different meanings. One of the words is “neos” which means: newness in the sense of renovation, like repairing something that already exists. It is unfortunate that many Christians apply this word to themselves and others that become believers and they end up in a life-long works program attempting to make themselves better people for God. It’s quite a bit like the modern concept of a “make-over” effort!

But the Koine Greek words used in this verse are NOT neos at all but rather come from the second word for new and that word is “kainos.” Kainos indicates newness in the sense of a totally fresh existance. It’s brand new, recently made, fresh, unused, unworn, unprecedented, uncommon and unheard of before! This is a most powerful understanding and distinguishment that results from Paul’s choice of the two words. See the verse following below which explains what I have been writing about using a Greek to English translation. 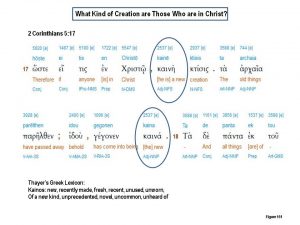 Note from Figure 151 that both words translated as “new” are #2537, kaine and kaina both coming from the root word “kainos.” All Christians need to develop an understanding of this event as it has far reaching power for mind renewal of who we are in Christ when we first believe. Your new creation is not merely a repair job of the old you, existing, carnal nature. It is a complete new creation that was not there before your conversion at the instant of belief when Christ came to indwell you. Your human spirit which was dead was resurrected and became an eternal Spirit at Christ’s indwelling presence! This has all happened in the spirit realm.

We were originally born physically by our parents with the character and image of the sinner Adam, but at the instant of belief we were created in the spiritual image of holy, righteous, and sinless Christ.

But let us go back to our original passage for there is more mind renewal in the passage.

5. “…even though we once regarded Christ from a human point of view, we regard him thus no longer” (2 Corinthians 5:16b, RSV).

Jesus came to earth physically as a man and was also simultaneously God. As we read and study this section of the Bible history we accept that as biblical fact. But He was put to death and resurrected and ascended into heaven to be seated at the right hand of the Father. That was NOT the end of the story but actually the start of the New Covenant story. He came back spiritually (remember, God is Spirit) in AD 70 to judge those who were waiting in Sheol (the separation of the sheep and the goats, Matthew 25:31-46), the personal resurrection of each individual who had believed during the transition era, the establishment of the spiritual kingdom with Christ reigning on His throne, etc. The Apostle Paul knew these events would take place because he had studied the prophets of old and what they had said in the sacred scrolls. It was that knowledge that led him to write the 2 Corinthians 5:16, 17 passage. That passage had two applications to believers: (1) to those living at the time Paul was writing (audience relevancy), and (2) to all believers who study the scriptures after Paul’s generation (including we believers today).

Paul is saying that in the past many came to know Jesus as the physical man written about in the scriptures but that fleshly knowing was not to be the future focus of knowing Jesus. The former was to know Jesus as a mere man, a common Jew, and NOT as the Messiah, the Son of God. Paul says that was the past, but now he/we know Him no more in that manner. Paul, and we believers today look at Jesus in a spiritual manner! The regenerated Christian, and Paul himself, have an entirely different view than Paul and we had before!

For Paul the powerful change took place when the Son of God was revealed in him.

As believers today, we Christians have our similar experience to Paul’s the first instant of belief, but since it was a spiritual event it happened to us but we failed to recognize the indwelling Christ in us until that biblical fact was revealed to us! Now we see Jesus quite differently than before. We should add here that this change in view is a very large change in our perspective. The two words “Jesus” and “Christ” appear in abundance in the scriptures but let’s examine them in some detail.

In the Old Testament the Hebrew word “Mashiach” is used and we know it as “Messiah.” In the New Testament Jesus is called “The Christ” which means “the anointed one.” When Jesus asked His disciples who they thought He was, Peter replied:

When Jesus was being interrogated by the Jews before His crucifixion, the high priest asked:

Luke writes that when Jesus cast demons out of some people the demons cried out:

9. “You are the Christ, the Son of God” and Jesus rebuked them not allowing them to speak as they knew He was the Christ” (Luke 4:41).

So Jesus is His human name as Mary had been told by the angel Gabriel (Luke 1:39) to call Him, but Christ is His spiritual title as the chosen one, the anointed Son of God. As “the Christ,” Jesus was God’s anointed One who fulfilled the Old Covenant prophecies, the chosen One who came to save us from the consequences of sin, and the One who came back spiritually to set up His spiritual everlasting kingdom in AD 70!

We are also told from the passage we have under study the expectation of how we believers interact with other humans in the world.

We have already seen in this Learning Activity that there are but two people groups in the world: (1) regenerated believers, and (2) unregenerated unblievers. If the verse above states that we no longer view people from a human point of view (and it does) how are we to view humanity? There is only one possible alternative: we look upon humanity SPIRITUALLY! Each human is either regenerated (saved, has eternal life, living in the light, alive in Christ), or is unregenerated (lost, does not yet have eternal life, is living in darkness, dead to Christ).

How does a believer come to express Christ in the world with the above in mind. The characteristic the scripture above describes has to be in our mind! Once the scripture has renewed our mind to this biblical fact, God does it all as He always does. Any attempt by our attempting to have this characteristic will result in a self works program of some kind and will be a frustrating failure if we do not just let God do it! God can do all things, we cannot!

Finally, I would like to share an object lesson I experienced during the time I was writing this particular Learning Activity which I think may be helpful to some. My definition of an object lesson is: An example from real life that teaches a lesson or explains something.

One morning while eating breakfast I decided to eat a pear. When I looked into our fruit basket I noticed that the outside of our pears were looking beat up and deteriorating. Using a knife I peeled off some of the skin surface and discovered that what I was seeing was all on the outside of the pear and it was quite perfect on the inside under the skin covering (see the photograph below). 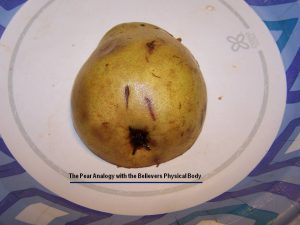 The thought then struck me that what I had just experienced with the pear is an accurate analogy or type between the Christian believer and the pear! The Christian believer does not always “look good” on the outside (looking at the physical), but on the inside they are spiritually perfect in the sight of God because Christ lives in us as believers! I hope this analogy strikes a positive note with some of my readers in understanding what a believer consists of while living in their physical body here on earth.