Jesus in the Tomb

From time to time on this web site I will write a Learning Activity because the motivation to do so originated from a web site visitor who writes me with a specific question or comment. This particular Learning Activity was written in response to the following question:

“Was Jesus Himself really dead during the three days He spent in the tomb, or did just His body die?”

Let’s take a look at what the Scriptures might tell us to help answer the question above.

2. What kind of a being does the verse above tell you that God is?

4. What does the verse above say is inherent in Jesus Christ?

6. In the verse above, what kind of a spirit is Jesus Christ said to have?

From one through six above we can conclude that Christ, who is Himself God, is a Spirit and that He is furthermore an eternal Spirit. So God will NEVER cease to exist because He is an eternal S0pirit!

Because of the above we must now investigate how it is possible for the eternal God to die!

12. We have already established in other Learning activities that the “Word” is one of the names for Jesus Christ. In the verse above, what does the verse say happened to Jesus Christ?

14. What does the verse above tell us about Jesus Christ?

The coming of Christ in the flesh can be seen in the following scriptures:

We can now see that the eternal God, Jesus Christ, was given a fleshly, physical, biological body like ours to live in for a period of time while He walked upon the surface of this earth for a period of approximately thirty-three and one-half years. This body is what was put to death on the cross of Calvary and is the “death” spoken of in the scriptures of #7, #8 and #9 above.

18. Jesus is our high priest in the New Covenant (see verse fourteen preceding the verse above). Why does the verse above state that Jesus was able to “be touched”with our “feelings” and our “infirmities” and be “tempted in all points as we are?”

Yet, Hebrews 4:15 gives us a clue that Jesus was “without sin.” Here it becomes necessary to show that the Scriptures teach that Jesus kept His body sinless here on earth as Jesus of Nazareth.

20. Who is being spoken about in the verse above? (HINT: Read verse twenty-one).

23. Who is being spoken about in the verse above? (HINT: Read verse twenty-two).

27. What does the verse above say about how Jesus was put to death?

33. How could Jesus have said that if His body was “destroyed” that He would raise (resurrect) it up again three days later?

In addition, the body of Jesus of Nazareth was physically resurrected and ascended into heaven while our physical body will never be resurrected as it is incompatible with our eternal existence. For a more complete understanding of the topic of resurrection please refer to Learning Activities #51 and #52.

The passage above fixes the time of day that Jesus died. Six (6) am is considered to be the beginning of the day for the Jewish people during the time of Christ on earth. The “ninth hour” as it appears in the passage above would take place nine hours after 6 am or three pm in the afternoon.

We can also obtain a very close estimation of His resurrection directly from the Scripture.

Although Mary’s arrival at the burial site does not give us an exact time of the day for Jesus’ resurrection it does fix an outside limit as the text clearly states that it was very early on the first day of the week (Sunday) while it was still dark and the tomb was already empty! we do not know the exact time of His resurrection but we do know it was no later than early Sunday morning. If we use the data we have collected above we will find that we are in serious trouble already due to what the vast majority of Christians tell us about His time in the tomb. Let’s do some counting.

Friday night – in the tomb.

Saturday – in the tomb.

Saturdfay night – in the tomb.

Sunday – the tomb is empty!

The maximum total occupancy in the tomb by tese calculations and understandings – two nights and one day!

Jesus Himself had previously made the following statement about His death and resurrection in conjunction with the scribes and Pharisees that questioned Him.

Some of you reading this material may say what is the big problem, the tomb was empty and witnessed to be so by a large number of people recorded in the Scripture. But that is neither the problem nor the solution at all. The problem is that Jesus, who is said to be God in the Bible, has made an apparent false statement (prophecy). Jesus becomes a false prophet, and even worse a liar, if He did not stay in the tomb for three days and three nights. It would be foolishness to trust and believe in a God that is a false prophet and lies even once. As Christians we know this cannot be true and there must be some thing we do not understand that would bring harmony to the passages we have looked at.

To begin to get to the bottom of this situation we need to investigate our understanding of the Sabbath. This is so because of the following passage.

Most people who know just a little about the Jewish religion know that the Sabbath is another name for the day of the week known as Saturday. Let’s call this the weekly Sabbath. Since there was to be no work performed on the Sabbath (Saturday) the day before it was a day the Jewish people made preparations to get through the weekly Sabbath. Those preparations resulted in that day (Friday) being referred to as “the day of preparation.”  But the huge surprise is that there were also additional Sabbath days that originated from certain Jewish holy days that took place at various times during the calendar year. These can be studied by referring to Leviticus chapter 23. It just so happens that in the week of Jesus’ death on the cross there was also one of these holy Sabbaths resulting in two Sabbaths during the same week! This holy day was the Feast of Unleavened Bread. The day before the Unleavened Bread would also be a day of preparation and I will demonstrate that it was the Day of Preparation referred to in the Mark 15:42 passage above in # 37. The weekly Sabbath was being referred to in Luke 23:56.

God told Israel not to do any work on the weekly Sabbath day.

There were two kinds of Sabbath holy days. Some did not require Israel to observe the “no work” rule but others, that were called “high holy days” did. The Sabbath during the week of Jesus’ death was the Unleavened Bread and it was a high holy day.

I have constructed a chart (Figure 28 below) that maps out the week in which Jesus died on the following graphic in the hope that it will clarify all of the events of that week. From the chart the conclusion I see is that:

Jesus was crucified and placed in the tomb on Wednesday and spent the night in the tomb.

The next day Jesus spent the day and night in the tomb (this was the Feast of Unleavened Bread.

The next day would be Friday and again Jesus spent the day and evening in the tomb.

On Saturday Jesus spent the day and part of the night in the tomb but was resurrected early on Saturday night.

On Sunday, when the women went to the tomb (early in the morning) Jesus was gone!

If you add up the above you will find that Jesus spent exactly three days and three nights in the tomb exactly as the scriptures state would happen! The Bible is amazingly accurate if we will take the time to search out the truth! 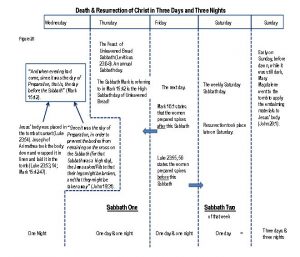