Two “Ages” of Time in the Bible

The Bible itself does not place emphasis on the above man-made division. The Bible makes a clear distinction instead between “ages,” although many translations of the Bible make it difficult to see this division. Let us look at this issue using the Scriptures.

Using your Bible, look up the following verses and write them in the space provided. As you proceed answer the questions as they appear.

Unfortunately the verse above is poorly translated in the KJV. The Greek word for “age” is “aion.” It is the word that the KJV translators have translated from the Greek to the English as “world” in the verse above. In addition, the word “aion” only appears once in the best Greek manuscripts we have of this verse, hence, in the KJV the second appearance of the word “world” is in italics indicating that this word is not in the Greek text.

The KJV translation of the Bible has chosen to use the word “world” for the Greek word “aion” instead of “age.” This makes quite a mess of this verse in the English. The Greek word “aion” means age, dispensation, era, or a period of time. In actuality then, the later part of the verse above should read more on the order of “it shall not be forgiven to him, neither in this age nor in the [one] coming” (The Interlinear Greek-English New Testament from the Nestle Greek by Marshall).

2. After making the necessary corrections to the verse above, how many ages does this verse say there are and what names would you give to them?

Some Christians use verses thirty-nine and forty to prove their belief that this world we live in is going to come to an end. By correctly translating these verses, you can see that these people cannot use these verses to validate that particular belief.

4. From your corrected reading of verse forty, what can you deduce about the subject of “ages?”

The word “world” in the verse above in the KJV is actually “age.”

The word “world” in the verse above in the KJV is “age.” This is another passage that Christians use who believe that this world is going to end someday. Again, you can see when you make the necessary correction that this verse cannot be used for that purpose because it was the “age” that was going to end and not the “world.”

Once again the word “world” in the verse above in the KJV is “age” and cannot be used to prove that this world will be done away with in the future.

8. In the verse above, what does Jesus say about Himself?

10. What does the corrected verse above tell you about the subject of ages?

In both occurrences of the word “world” in the verse above, the KJV should have used the word “age.”

12. What do the two verses in #11 above tell you about the topic of ages (disregard what is being said about marriage, dying and angels)? 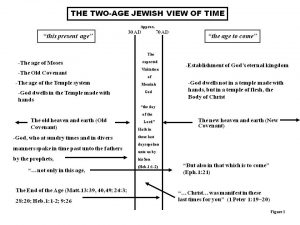 Again, in the KJV, the word “world” is “age.” We have not yet studied Satan, but what this verse is saying is that Satan (who was the god of “this age”) had left blinded many unbelievers in that age (prior to AD 70, we shall see later). In Romans 16:20 Paul says that shortly Satan would be crushed (as prophesied in Genesis 3:15). Satans power to oppose the consummation of redemption was over!

I am amazed how off base the KJV translators were when they translated this verse. If you read the verse carefully you will see that they are stating that the end of the world took place during the era of Christs’ crucifixion! The Koine Greek text totally disagrees with that translation work and many other translators do also. Here is what the Koine Greek looks like.

The material above indicates how “out of step” the KJV translators were in performing their work!

In summary, this Learning Activity has attempted to explain the topic of “ages” from the Scriptures. The following points are important.

A. The Bible teaches that there are two ages.

B. The two ages are distinguished in Scripture by “this present age” and “the age to come.”

D. Some Bible translations, and particularly the KJV, translate “aion” in most places as “world.”This is incorrect as world is either the Greek word “kosmos” or “oikoumene.”

The KJV was a prominent Bible translation used in seminary training for many years in Protestant circles and is still considered by a few to be the “standard” for Bible translation even today. I find it interesting that although many of the translation errors found in the KJV have been corrected in the NKJV, the doctrines and beliefs formulated using the old KJV have NOT been changed. Although modern scholarship has improved the NKJV translation work, in the case of the two ages it has not had a significant impact on Bible doctrine saying the world will have an end!