The Two-Age Jewish View of Time

The “ages” spoke of in Learning Activity #23 refer to the Jewish idea of separating the time before Messiah from the time after the advent of Messiah. They thought of human history being divided up into these two ages (Thayer’s Greek-English Lexicon of the New Testament, Page 19).

The New Testament writers, and Jesus Himself, considered themselves to be living during the period of time where one age was to end (also known as the Old Covenant) and the bringing in of another age (the New Covenant). This did not mean that history was to end in their time, but that a new age (covenant) was anticipated to come in.

In the Scriptures, the two ages are contrasted against each other. “This age” is contrasted with “the age to come.” The phrase “age to come” requires that “this age” has to have an ending to it. Since the “age to come” is not said to have an end, then the expression “the last days” must apply to the end of the “this age” period or the Old Covenant. The end of the “this age” (Old Covenant) is when God’s eschatological program would be fulfilled. These two ages are presented in pictorial form in Figure One. 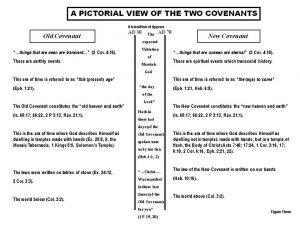 “This present age” may be characterized as the age of Moses and the law and the all encompassing term “Old Covenant” can be applied to this time period. It is the age of the temple system of priests, sacrifices and obedience to the law. God made His dwelling place in temples made with human hands during this age.

In contrast, we find that in “the age to come”

6. What can we say about God’s dwelling place in “the age to come?”

We have already discovered that “in the age to come,” that God lives in the believing Christian (see Learning Activities #7 and #8).

There is a period of time which I have depicted as AD 30 to AD 70 on Figure One that needs some explanation. This period begins with the earthly ministry of Christ which is generally placed at AD 30 (I am aware that there is an error in the ancient calendar that can cause this date to be in error. Even with the error, both dates would be displaced in the same direction and the forty year interval between them would remain the same). This is the time that was prophesied in the Bible as the coming of Messiah to His people the Jews. This is the “last days” of Hebrews 1:1–2 in which we are told that God now speaks to us not by prophetic voices of the Old Covenant, but by His Son.

Theologically the Old Covenant (what was called the present age at the time of the writing of the scriptures using that terminology) was done away with at the cross. However, as long as the temple stood in Jerusalem, the priests and the people would have gone about their “business” of religion if all of that had not been obliterated from the scene. By using the Roman army, God leveled the temple and destroyed the city of Jerusalem along with the temple geneological records thereby preventing any future continuance of the Jewish priesthood. All of this was accomplished in AD 70. This accomplished in actuality what had been theologically carried out on the cross some forty years earlier – the elimination of the Old Covenant and its replacement with the New Covenant. The New Covenant was already open and available to the people as the Old Covenant was being taken away, but it was hampered until the actual fulfillment of the destruction of the Temple and the religious systems that surrounded the Temple. Only at and after the destruction of the Temple would the New Covenant be fully disclosed, not by further revelation, but by historical verification itself. The fall of Jerusalem and the Temple verified that the New Covenant way into the presence of God was now fully available to those who believed in Christ. 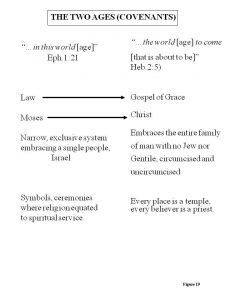 This Learning Activity contains information that is key to your understanding of the Scriptures. Many of the points discussed in this Activity will be expanded upon in later Learning Activities.

In summary, we have found from this Learning Activity that:

A. “This present age” is the Old Covenant and ended theologically at the cross and was completed in actuality at the destruction of Jerusalem in AD 70.

B. The biblical expression “the day of the Lord” describes the coming of Christ in judgement on the city of Jerusalem (after His resurrection and ascencion) when He destroyed the Jewish system of religion by using the Roman army in AD 70.

C. “The age to come,” although spoken of as a future event in the Scriptures, was the replacement of the Old Covenant with the New Covenant. This is no longer a “future event” but a present reality in the life of the Christian today, having taken place at the cross and consummated in AD 70.

The above material is meant to be but an introduction to these biblical events and will be clarified to greater depth in later Learning Activities.