The Hebrew word “b’rith” in the Old Testament and the Greek word “diatheke” in the New Testament translate into the English as “covenant.” A covenant is a promise or understanding on the part of God to act in a certain manner toward man in accordance with the terms of the particular covenant.

Sometimes “diatheke” is translated “testament,” however this translation is not correct as the Greek has a specific word “diatithemi” for that particular English word.

There is much written in the Bible about the Old Covenant and we could write an extensive document on the subject if our goal was to be exhaustive. What follows is somewhat of a simplified history and explanation of the Old Covenant.

2. In the verse above, who is the first recipient of the Old Covenant?

4. In the verse above, to whom was the Old Covenant given? (Note: See verse two to determine who is being spoken of in this verse).

The verse above is the initial statement in the Bible of the covenant God made with Abraham (at that time he was called Abram). This covenant was repeated, amplified and passed along through restatements to others along the way.

7. What words in the verse above seem to be the essence of the covenant?

9. What is the essence of the covenant as seen in the verse above?

The Old Covenant is sometimes taught as being for the nation of Israel and did not include Gentiles.

11. In the verse above, those who came out of Egyptian captivity were called “a mixed multitude.” What do you think this “mixed multitude” consisted of?

In the scripture above, Moses’ father-in-law was a pagan priest from Midian, but after seeing and hearing of God’s power he offered sacrifice to God and ate a covenant meal with Moses and the elders of Israel.

In the book of Ruth we read where Ruth, a Moabitess, has faith in God (Ruth 1:16) and even ends up in the geneological line of Christ (Matthew 1:5).

From the above we can see that the use of the term “Israel” is not exclusive to the descendants of Jacob, but rather is given to the people of the covenant regardless of racial origin.

In the above reading, the word “testament” appears six times in the KJV. In verse eighteen, there is no Greek word in the text for testament at all (that is why the word is in italics), however the word “first” is certainly speaking about the Old Covenant so it does no violence to the translation to insert it. In all of the occurrences, twice in verse fifteen, once in verse sixteen, once in verse seventeen and once in verse twenty the word should be translated “covenant.” This is a significant portion of scripture as it tells us that:

A. Christ, by His death on the cross of Calvary, is the redemption for those under the Old Covenant so that they might have an eternal inheritance (verse fifteen).

B. Christ was the testator (the one who made the legal covenant) of both the Old Covenant and the New Covenant), verse sixteen.

C. Christ had to die (as the testator) so that we might have redemption (verse seventeen).

D. Both the Old and the New Covenants were consummated by the shedding of blood (verse eighteen). 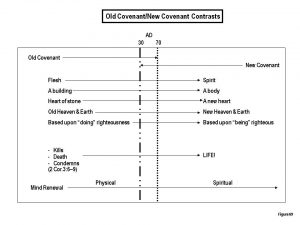 The best way I have found to distinguish Old Covenant passages from New Covenant passages in my Bible work is to be aware of the characteristics of both covenants. The chart above is a good start on becoming familiar with rightly dividing the Old from the New. I’ll be presenting more on this later in this Learning Activity.

15. What does the verse above say that is necessary to please God (to have salvation)?

The verse in #16 above tells us that the Old Covenant saints died in faith, but a question we might ask is: Faith in what? Their faith was in what God had told them, which essentially had started with Genesis 3:15 and continued with the future expansion of the covenant to Abraham – a Messiah Savior would come to Israel. The promise was that the Messiah Savior would be raised up to redeem His people from their sin. It was faith in the coming Messiah, Jesus Christ, that Israel was to have faith in even though Jesus Christ was not specifically named.

The verse above shows that the covenant to Abraham was called “the gospel.” The Old Covenant was a covenant of salvation through Jesus Christ (even though they did not live to see Jesus of Nazareth physically) the Messiah, by faith. 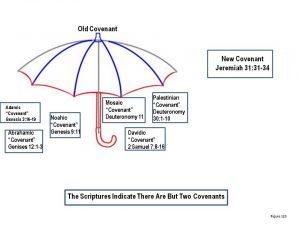 There are some Christians that think that there are numerous Bible covenants, but a careful reading of the Scriptures will convince you that the Bible speaks ONLY of two covenants! The illustration above is an attempt to illustrate that in the Old Covenant what people think are multiple covenants are no more than the same covenant that is repeated, amplified and passed on to different people in the Bible literature.

Through the sinfulness of the people, the system of Judaism became increasingly a world of legalism and death. Even though God had given the law to lead Israel to Christ (Galatians 3:24), it had been corrupted by Israel’s wicked leaders, and violated by the people. Israel relied more on a works/religion/ritual plan for salvation which Christ threatened to take away from them when He came as their Messiah, and for that reason, they crucified their Messiah.

The Old Covenant was a temporal covenant and was replaced by the New Covenant as we shall see in a later Learning Activity. 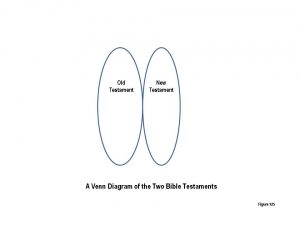 The Venn Diagram above represents the Old Testament and the New Testament. The two are separated in the Scriptures by a time period of about 400 years known as the intertestamental period or the silent years. 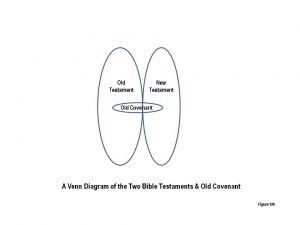 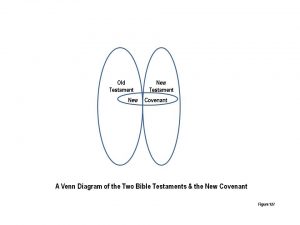 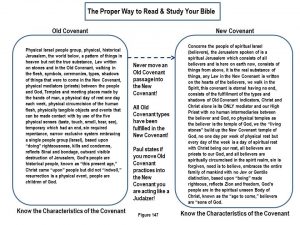 Double left click your mouse on the graphic to enlarge it.