The Significance of Abraham’s Two Sons

In the book of Genesis we find the record of Abraham’s two sons, Ishmael and Isaac.

At this time, God had not yet changed Abraham’s name so he is still called Abram. In the verses above, we see where God makes a promise to Abram to give him a son who would bring forth seed (descendants) that would be more numerous than the stars in the heavens. This son will be Isaac who is known in Scripture as the child of the promise.

But Abram and Sarai (his wife) took the fulfillment of God’s promise into their own hands by deciding to help God along by Abram and Hagar (Sarai’s servant) conceiving and bringing forth a child on their own. His name was Ishmael and he is called the child of the flesh!

God, being faithful to His promise, gave Abram (now called Abraham – see Gn.17:5) and Sarai (now called Sara – see Gn.17:15) the promised son even though Sara was now ninety years of age (see Gn.17:17) and well past the age of child bearing.

Things did not go well in Abraham’s household, and after a period of time he put Hagar and Ishmael out of his house.

It is quite obvious from reading the passage above that there were some Christians in the Galatian church who had a desire to place themselves back under the law of the Old Covenant (Does that sound familiar to you?). Paul uses this allegory in an attempt to reorient their thinking. We know it is an allegory and it is speaking of the two ages (covenants) because Paul clearly says so in verse twenty-four.

In verse twenty-three, Paul says that Ishmael was born after the flesh (by Abraham and Sara’s “good idea”) and Isaac was born after the promise of God (as Sara was too old to bear a child without a miraculous intervention by God).

In verse twenty-four Paul states that the Old Covenant is from the mount of Sinai (where the Ten Commandments and the law was given to Moses) and led to bondage represented by Agar (Hagar).

In verse twenty-six Paul states that “the Jerusalem which is above is free, which is the mother of us all.” This speaks of the New Jerusalem (a topic we shall write about in a latter Learning Activity), which is the New Covenant church of which all believers are now a part whether they know this as factual or not!

In verse thirty, Paul uses the period of time where Hagar, Sara, Ishmael and Isaac lived together prior to Hagar and Ishmael being put out of the home as a parallel of the approximate period of forty years (AD 30 to AD 70) when the Old and New Covenants coexisted during the transition to the New Covenant. The bondwoman and Ishmael (a type of the Old Covenant) were cast out in AD 70 when Jerusalem and the Temple were destroyed.

Paul ends his allegory in verse thirty-one by emphatically stating that the Galatian’s were NOT children of the bondwoman (the Old Covenant) but of the freewoman (the New Covenant). 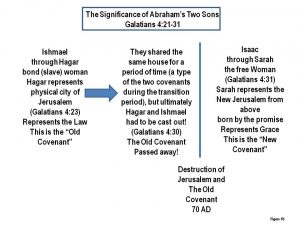 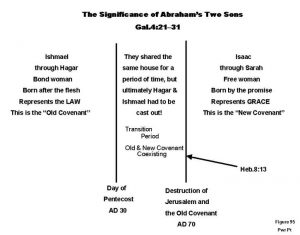