Death and Resurrection Under the Old and New Covenants

Since we have established the truth of spiritual resurrection in the previous Learning Activities, it might be good to summarize how all of this fits together under both the Old and the New Covenants.

4. What do the verses above indicate to be both the source and the ultimate end of our physical (biological) bodies?

The facts above determine the destination of the material (physical) part of us, but what about the immaterial (spiritual) part of us? It is unfortunate that one of the past prominent Bible translations, the King James Version, translates the name of this place as “the grave” thirty-one times, as “hell” thirty-one times, and as “the pit” three times. The actual word should be “Sheol.”
5. Psalms 49:15

The Hebrew word “Sheol” describes the place where the Old Covenant dead (without their physical bodies) went to after biological death to wait for Christ to be crucified on the cross and to return after His ascension at His Parousia. That return event would coincide with their resurrection. God’s people of the Old Covenant did believe they would someday be rescued from Sheol as indicated in the verse above, “…God will redeem my soul from the power of the grave: [Sheol] for he shall receive me.”
The New Testament Greek word for the same place appears in the Bible as “Hades.”
6. Acts 2:27

Everyone biologically born under the Old Covenant had one of two choices to make (as we also do today under the New Covenant). Those two choices were either to believe what God had said or not to believe. When everyone biologically died under the Old Covenant they went to a place the Bible calls “Sheol” in the Hebrew or “Hades” in the Koine Greek regardless of whether they believed or not.

Those in Sheol/Hades had to wait as their resurrection/judgment/redemption had not yet been completed by Christ on the cross of Calvary and the completion of His Parousia.

10. What was it that distinguished these people from others?

As you continue with this Learning Activity, refer to Figure Six. 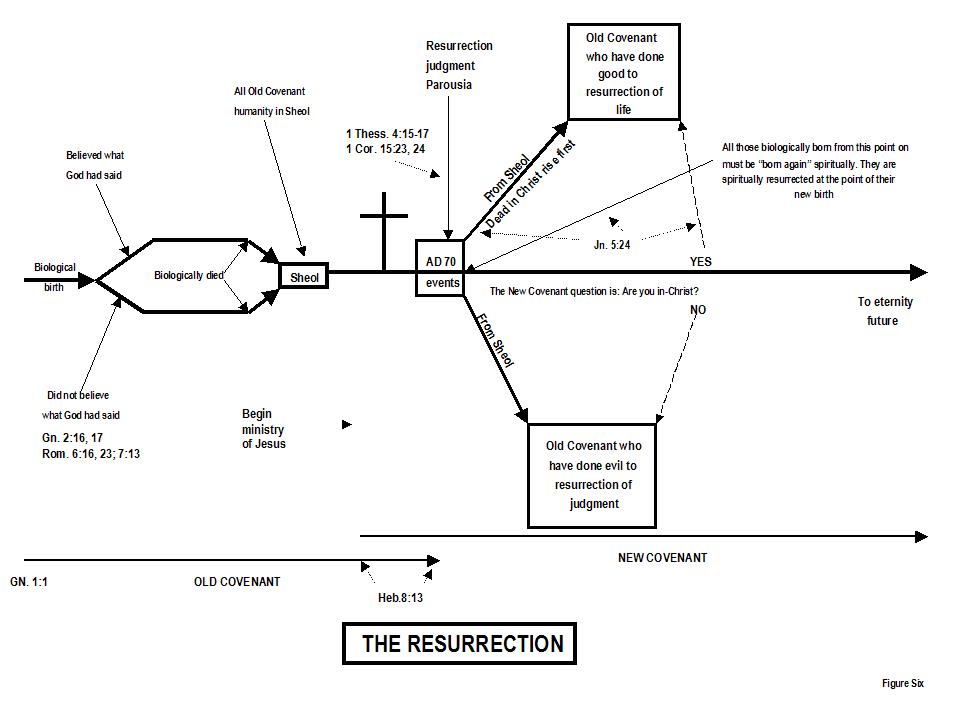 12. What is the meaning of the section of verse 40 that states “…they without us should not be made perfect”?

In essence what the verse above has said is that the Old Covenant believers would be indwelt by the Godhead at the same time that New Covenant believers were indwelt. One group did not become “perfect” before the other did. It all happened at the circa AD 70 general resurrection and judgment event at Christ’s Parousia.

The 1 Thessalonians passage above is a parallel to the Hebrews 11 passage in #8 above.

14. To whom is Paul writing this passage?

15. What is Paul referring to in verse 15 when he states, “we which are alive and remain unto the coming of the Lord”?

16. Who is Paul referring to in verse 15 when he states, “them which are asleep”?

17. What is Paul using when he uses the words and phrases in this passage such as: “with a shout,” “the voice of the archangel,” “the trump of God,” “caught up….in the clouds, to meet the Lord in the air”?

This description is an explanation that is parallel to the Hebrews 11 passage we looked at in item #8 above. Notice in that passage that this was the time when those believers in Sheol/Hades as well as those believers who were alive biologically would be “made perfect.” From that time on every one who believes in Christ is resurrected from their sin-death at the instant of their belief in Jesus Christ and made perfect. It is NOT good works or good behavior that makes a person “perfect” in the biblical sense. It is the resurrection from sin death and the indwelling of God (He who is the ONLY perfect one!). That is what makes a Christian perfect in God’s sight.

There was a definitive sequence to the events we have been describing.

“…we which are alive and remain unto the coming of the Lord shall not prevent (precede) them which are asleep” (1 Thessalonians 4:15).

“But every man in his own order: Christ the firstfruits (firstfruit); afterward they that are Christ’s at his coming. Then cometh the end (of the Old Covenant)” (1 Corinthians 15:23, 24).

Those who belong to Christ would include both the Old Covenant and New Covenant people who had trusted in God. Those who were alive biologically at the Parousia (circa AD 70) who had believed would also experience (spiritually) their resurrection from sin-death at that time and live out the balance of their biological life.

Once again we read where those who had previously lived and died biologically and were waiting for their resurrection out of Sheol/Hades were resurrected and judged. Those who were not written in the book of life (had not believed God) were directed to the lake of fire along with death and Hades. Notice that those who did not believe God suffer a “second death,” while those who did believe God did not suffer this second death. Once a person is “born again” or believes in God they spiritually never die again which is what Jesus said in the following passages.

These Learning Activities should have a profound impact on your thinking about the topic of resurrection. It is a major biblical topic and you will be learning more about it as you continue your studies of the Scriptures.