The Origin of the Bible

The English word Bible, is derived from the Greek word “biblios” meaning “a little book.” This Greek word was derived from the word for the bark of the papyrus plant, “biblos,” which in ancient times was a material used to make material on which a person could write. The plural form, “biblia,” or books, was used to describe a collection of holy writings. At some point in time an error was made in what is known as the grammatical case of this word and the plural “books” became known as “book” and has continued to this date. The Bible is also referred to as the “Scriptures” a term that is used thirty-one times in the New Testament.

In assembling the various writings into one book, the Bible was divided into two major sections. These sections are the Old Testament and the New Testament. Since the change from the old to the new took place during the ministry of Jesus of Nazareth, we shall find that although Jesus brought in the New Covenant, the Old Covenant did not disappear from view until the destruction of Jerusalem and its temple in AD 70 and the Parousia (return, presence of Christ). See the various Learning Activities on this web site which explain those details. The nomenclature of Old and New Testaments and Old and New Covenants can be confusing to some so I am including a graphic on this topic below to help you to sort this out. 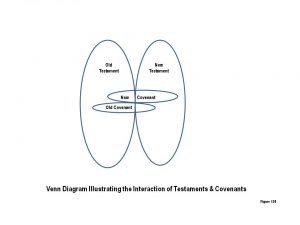 The word “canon” comes from the Greek word meaning reed, rule or measurement standard. It is the list of books that are generally regarded as authoritative and divinely inspired. This process of acceptance by the church is what is known as the canonization of the individual books/writings into the Bible. For the Old Testament there are two major beliefs as to how the Old Testament canonization took place. I will discuss both of those methods in this Learning Activity.

One understanding is that the Old Testament was canonized by a group of one hundred and twenty spiritual leaders of Israel when they returned from Babylonian captivity. Ezra presided over the work of this group which collected the writings that had been handed down from the past which they believed to be divinely inspired. It is thought that these meetings took place sometime in the middle of the fifth century BC. To fix an exact date for this event is far from being easy as the ardent student of the Bible will quickly discover if they research this topic in depth. At the time of my writing this Learning Activity an Internet web site that contains the following article would give the Bible student insight into the complexities of establishing the date. See The Old Testament of the Early Church Revisited, by Albert C. Sundberg, Jr., 1996. The only way you can access this material is by typing the title above in your search box and looking for that particular site.

The criteria that was used to establish which writings were to be included and which were to be excluded from the canon is as follows.

A. Is the writing under examination divinely inspired? Did it appear to come “from the hand of God?”

B. Is the writing prophetic? Was the material written by a prophet, apostle or a spokesperson of God?

D. Is the writing dynamic? Do the writings contain the life-transforming power of God?

E. Was the writing received, collected, read and used by God’s people?

The Old Testament canon is also verified and validated by the New Testament. Jesus and His apostles make reference to and quote over six hundred times from the Old Testament writings. A small sample of these are as follows.

2. What is significant about what Jesus said in the verse above?

4. What writings do you think Jesus was referring to in the verse above?

5. “For what sayeth the scripture? Abraham believed God, and it was counted unto him for righteousness” (Rom. 4:3). Notice that Paul is quoting from Genesis 15:6 and he refers to the Genesis material as being “scripture.”

Let’s look briefly at the books known as the “apocrypha.” In my research it seems that the apocrypha entered into the Old Testament canon in the following manner. About 280 BC seventy scholars gathered in Alexandria. All of these scholars were from Palestine. The meetings had the purpose of translating the Hebrew Old Testament into the Koine Greek language. This translation was known as the Septuagint from the Greek word meaning seventy. The translation work came about because many Jews lived in Alexandria at that time and Ptolemy Philadelphus, who was reigning at that time, gave political and religious rights to the Jews. This was also a time when many of the great literary works were being translated into Greek, hence the birth of LXX which is used to identify the Septuagint. LXX being the Roman number for seventy.

It seems that the translation work for the Septuagint took approximately one hundred years to complete. It was during this time period that the extra books of the apocrypha found their way into the document. It is important to note that all of the books that were placed into the Old Testament cannon were written in Hebrew. The apocrypha, however, were written in Greek! This version of the Old Testament was officially accepted by the Roman Catholic Church at the Council of Trent in AD 1546.

There were many significant Bible translations that took place along the way that are today valuable resources of the Bible. In about AD 200 the Syrian Christians translated the Bible into the Syrian tongue. In AD 400, Jerome translated the Old Testament into the Latin language which is known as the Latin Vulgate. Around AD 500, a group of Jewish scribes of the Masoretes developed the Masoretic text of the Bible. This work was a key to Bible scholarship because as the scribes did their translation work they noted in the margins of their text any variant readings that were in existence at the time. The oldest Masoretic text that we have today dates back to AD 916. Thousands of Masoretic texts exist.

A second understanding of the origin of the Old Testament canon is that it was canonized in three stages. The first step consisted of what is known as the Pentateuch which are the five books of Genesis, Exodus, Leviticus, Numbers and Deuteronomy. These five books are said to have been canonized in 400 BC. The next grouping to be canonized was the section known as the prophets and that took place in 200 BC. The third and final stage of canonization took place in AD 90 at the Synod of Jamnia. The standards used in this process are the same as described in our earlier material above.

We should examine some of the details of the New Testament canon. As New Testament books began to appear, the church used and gave them the same authority and respect as they did to the Old Testament writings.

8. What similarities do you see between the two verses above?

11. What significant position does Peter take in the two verses above insofar as his writing and that of the apostles is concerned?

13. What significant statement does Peter make in the two verses above?

The New Testament canon was adopted by the Council of Carthage in AD 397.