Church in the Bible

NOTE: The Revised Standard Bible translation (RSV) is used in this Learning Activity.

Not unlike many Christians, in my journey I have devoted a large commitment of time to studying the church. I have concluded from my studies that to comprehend what the institution known as “church” is, a person has to approach church from various distinct vantage points.

The Old Covenant Church existed from its inception in the Old Testament until it began to phase out during the ministry of Jesus of Nazareth. Jesus Christ fulfilled the Old Covenant and began the introduction of the New Covenant. The New Covenant and its church did not completely come into fruition until the Parousia, AD 70, when Christ came back to earth (spiritually) during the Destruction of Jerusalem, which coincided with the complete doing away of the Jewish priesthood in the Temple, and the physical Temple itself as it was destroyed by the Roman Army under the Roman General Titus!

The New Covenant and its church began to phase in with the ministry of Jesus of Nazareth and was fully established in the spiritual realm AD 70 at the time of the Parousia. What this results in notably is an overlapping of the Old and the New Covenant church resulting in a period of approximately forty years where, if you had been living at that time, would have been a mixture of the old and the new. The apostles, and especially Paul, was a leader in taking the people in the Old Covenant church and “insisting” on them moving forward without the trappings of the Old Covenant church (which was physical in nature). 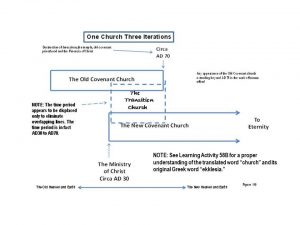 Click your cursor over the graphic to enlarge it.

The major emphasis in this Learning Activity is the New Covenant church as it is the one that we are part of today as Christians. All else passed away in God’s “eyes” when the full implementation of the New Covenant came into being at the Parousia of Christ in AD 70.

2. What instructions were given to Moses in the verse above?

4. What is Solomon describing in the passage above?

Everything recognizable about the Old Covenant church was physical in nature and could be distinguished by the five senses God had given to mankind.

6. What physical activity is highlighted in the verse above?

8. What did God give to Moses in the verse above?

10. What did God tell Abraham and his descendants to do in the verse above?

There are numerous traits of the Old Covenant that you may add to the above list through your own personal study of the Scriptures. What I would like to do now is to contrast the three Old Covenant traits above which were intended to be types or shadows of spiritual realities in the final New Covenant.

12. What kind of a “house” are we according to the verse above?

14. The Old Covenant priests offered animal sacrifices to God. According to the verse in #11 above, what kind of sacrifices do we offer?

15. Does this mean that we use the title of “priest” for ourselves and wear priestly garments?

17. Where are the laws of the New Covenant to be found today?

19. In the New Covenant, what part of the body is referred to as being “circumcised?”

20. Does the verse above tell you this circumcision is physical or spiritual?

22. Does the verse above describe the New Covenant circumcision as being physical or spiritual?

Like the Old Covenant, the New Covenant has many traits that you may add to the above list through your own personal study of the Scriptures. I conclude from this study that the Old Covenant was physical in nature and could be physically experienced by the five physical senses that God has given to us. I also conclude that the New Covenant is entirely spiritual in nature and cannot be experienced by our five physical senses.

But what about the concept of the “Transitional Church” that was mentioned at the beginning of this Learning Activity?

Many believers today do not understand that we live today in a different time than those who wrote the New Testament. Those writers lived in what is known in the Scriptures as the “last days” which refers to the last days of the Old Covenant. Those last days began with the earthly ministry of Jesus of Nazareth (AD 30) and ended with the Destruction of Jerusalem, its Temple, and the Parousia of Christ in AD 70. This forty year period of time of transition encompassed the Old Covenant being phased out and the New Covenant being phased in. It was a time of overlap of the two covenants and the believers were living their lives in an environment of mixture of the two covenants. This led to many passages appearing in the Bible that would make little sense to the reader without having an understanding of that time period.

24. The flesh here is indicative of the Old Covenant while the spirit indicates the New Covenant. What do you think was going on that would cause Paul to write as he did to the Galatians?

This was a work in progress to go from the Old Covenant to the New Covenant.

26. What does the verse above tell you about the transition of the believer?

28. What words in the verse above indicate the transitional nature of the time era?

30. For how long did the Philippians have to wait for their Savior, the Lord Jesus Christ?

32. When did Christ appear “a second time” as indicated in the verse above?

I occasionally receive communication from some Christians who think it to be absurd to believe that God would have an arrangement where two entirely different covenants would be standing alongside each other in the Scriptures as “God is not the author of confusion.” But their belief is contrary to the scripture.

In this allegory we have two women, Hagar and Sarah. The allegory clearly states that these two are symbolic of the two covenants and the two biblical Jerusalem’s – one being the physical Jerusalem of mortar and bricks, and the other being spiritual Jerusalem (which incidentally is we Christians today who believe in Christ!). The important point for this Learning Activity is that Hagar coexisted with Sarah (indicating that both the Old Covenant and the New Covenant coexisted for a time). Eventually Hagar and her son were cast out just as the Old Covenant was replaced by the New Covenant!

Therefore, during an approximate period of forty years there was a continuing but dwindling presence of the Old Covenant mixed in with the incoming New Covenant. This mixture was facilitated by the presence of the Temple in Jerusalem along with its sacrificial services and trappings. Believers in the transition church struggled to bring along these practices into the New Covenant church. The Apostle Paul constantly writes against this practice to discourage the believers doing this. It is unfortunate that some in the church today are still doing this same thing (which is actually a form of a Judaizer!).

After the Parousia we are no longer in that transitional church although many Christians through human effort keep vestiges of the Old Covenant alive in their belief systems. We live today in the “presence” of God every minute of every day! We live and move and have our being in Christ and are living in the spiritual New Jerusalem that is described in the book of Revelation!

What I am leading to in this Learning Activity is for the reader to listen closely at what comes from behind the pulpits of the man-made institutional church organizations. What will now follow is a number of examples of what I mean and I will add to this listing from time to time.

“We express verbally in the church through song and verbiage that the way into God’s presence is through worship!”

When I hear this position being taken I wonder where the origins for this belief come from. The first place I always look is in the Scriptures.

Take note in the above verse that the connection between God’s presence and praises is directed to the Nation of Israel!

Note that in this verse that there does appear to be a connection between the presence of God and thanksgiving, making a joyful noise, and the use of songs of praise. However, a more complete search of the Scriptures reveals additional facts on the subject.

In the above verse we are informed that “…In him we live and move and have our being…” This verse is another in a long list of clues where we are being told that He lives in the believer! This is a very powerful understanding. Are you aware that Christ lives in you? Can the presence of God be any more obvious or powerful than God living in the believer and the believer being in God? Is it not true that we live in the presence of God continually from the moment of our belief?

The first element you must draw from the verse above is that God is a Spirit! There are Christians that think God is still somehow a physical being, but that all ended when Jesus of Nazareth (who was and is God) ascended! So, the only way you can “get involved” with God today is in the spiritual realm. God truly is Spirit and we worship Him in spirit and in truth. But look at the dynamite revelation to us in this verse – we are God’s temple and God’s Spirit dwells in us. Do you understand that? Do you believe that? Does this not say that we live continually in the presence of God?

Note that “…God abides in us…” Do you think there is any possibility that you are able to get into God’s presence any more than having Him abide in you?

Another verse proclaiming that God abides in us! The question we must now resolve is why is it that verses in #34 and 35 above seem to disagree with #36, 37, 38 and 39? If you have been studying the material on this web site you should be able to conclude that the two verses from the Psalms are Old Covenant verses and those in 36 through 39 are speaking of what exists in the New Covenant. When some person attempts to stir up your emotions with songs and praises they are misled as Christianity is NOT about feelings at all – it is about biblical fact and a hungry Christian will always seek out the facts!

Click on Self – Check below to check your answers.