Learning Activity #8F – Christ in You the Hope of Glory

NOTE: In this Learning Activity I will be using the Revised Standard Bible translation (RSV).

” Of all the prominent doctrines of the Scripture, the doctrine of the believer’s union with Christ is probably the most neglected. Even many systematic theologies tend to pass over it, only making brief comments here and there concerning its nature and relevance to the Christian life. Although it has not received much attention, the truth behind the doctrine is absolutely foundational to the Christian life. Our union with Christ is the basis of our spiritual life.”

2. In the verse above, how does God’s written word describe Christ? (Record your answer in the space provided).

4. How does the apostle Paul describe the gospel in the verse above?

The topic we are about to study cannot be understood in any detail without divine help. It cannot be known by natural abilities and mental powers. It is a truth that was hidden in the counsels of God down through the ages and generations until God in His grace chose to make it known by divine revelation.

The apostle Paul says that this mystery had been hidden from the past ages and generations; but in his lifetime was manifested to the saints (believers). It was concealed from angels and men until God revealed it.

“Each separate individual must have Christ revealed to him/her by the work of the Holy Spirit, or else they remain in darkness. Blessed and happy are they to whom the Lord has laid open the divine secret which prophets and kings could not discover, which angels desired to look into.”

In the verse above the fact of union between the believer and Christ is clearly established, but does not elaborate on the manner of the joining, or the meaning of the event. Passages containing the union of God with believers are extensive in the Scriptures. Refer back to Learning Activity #8 for a rather complete list.

8. What does the passage above tell us that our priorities here in this physical life on Earth should be?

9. Verse four speaks of “when Christ appears again.” When did that event take place for the Colossians?

Our life here on Earth is bound up with Christ’s life. Paul made other statements that support this understanding.

Paul understood that due to his union with Christ that he could no longer say that he lived his own life. He had been crucified with Christ, had died to the old man and was to live as the new man in Christ through faith. 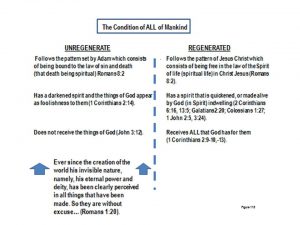 The “Condition of All of Mankind” chart depicts the first aspect of our union in Christ as being positional. All of humanity has one of two positions in the sight of God. They are either unregenerate or regenerated; condemned or justified; guilty or innocent. Those who are in Adam are the unregenerate, condemned, and guilty, and have spiritual death in them. They are alive physically, but are spiritually dead. Those who are in Christ are those who are regenerated, justified, and innocent, having been resurrected from their spiritual sin death and having been made alive in Christ. That is why Paul made the following statement.

12. From the verse above, what determines our spiritual condition?

This same truth is also found in the following passage.

Our position before God is changed when we change our allegiance from Adam to Christ. As a believer we are positionally joined to Christ and our relationship is changed from one of condemnation to one of righteousness. At the instant of our belief what Christ has done for all mankind is accrued to the believer by the fact that we are placed (spiritually baptized) into Christ. This has nothing to do with water baptism. Water baptism was an Old Covenant type, while Spirit baptism is the anti-type or fulfillment of that Old Covenant type. For more information on biblical types and their fulfillment study Learning Activity #66 on this web site.

Our position in Christ is not a conscious experience and must be accepted as fact by faith. Our feelings and perception of this positional union in Christ do not come from emotions but spiritual fact. This union with Christ is also not progressive but rather is instantaneous at the moment we believe and are regenerated which is also described as being born again.We can never be more in Christ than we already are. It is complete, lacking nothing. An enormous fact of this event is that the believer has every spiritual blessing that is necessary for our spiritual life because we are in Him (Christ) who is all of those spiritual blessings! Although our union is not progressive, our understanding and perception of this union in Christ does grow through the renewing of our mind. This will affect the manner in which we relate to God and others. If you listen to other Christians during your walk in Christ you will see this fact being ignored by the statement of one Christian to another saying such things as, God bless you, which totally violates the above truth. A Christian has every spiritual blessing s/he can have at the moment of regeneration! Nothing can be added to the individual’s blessing with the exception of the believer understanding what s/he already has in Christ!

15. What does the verse above say we should have taking place in our minds?

Our union in Christ is not just external, but is a spiritual union which is internal. He (Christ) is in us and we are in Him. Our spirit is joined with His Spirit as indicated in the verse of item #6 above and the graphic following. 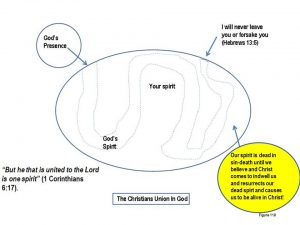 The graphic above was developed in an attempt to portray in a physical fashion what happens when Christ enters the human believer spiritually. Any such attempt to depict a supernatural event in a physical manner will always fall short of the reality, but I tried my best. For what it is worth it helped me to somewhat understand this great biblical miracle!

This interpenetration or commingling of God’s Spirit with our spirit sets the stage for Christ being our source for every spiritual blessing as well as eternal life in the spiritual realm. Our spiritual life flows from Him.

Since I just mentioned our spiritual life let’s look at a much misunderstood aspect of that life.

19. What does the verse above tell us about sin and the believer?

Death frees a person from commiting sin. Because we have died with Christ, our sinful body that enslaved us to sin has been destroyed. It is important to understand that when Paul refers to our death or crucifixion with Christ that the verbs describing this activity are in what is called the aorist tense which indicates that this is a past event. Our death to sin became an accomplished reality in the spiritual realm when we were Spirit baptized into Christ at the instant of our belief!

Since Christ’s resurrection means that death does not have dominion over Him (Christ, as He died once to sin), we also, by virtue of our union with Him in His death and resurrection, are to consider ourselves dead to sin. We die to the power of sin in our lives through our union with Christ. Because sin and death cannot rule over Christ, neither can they rule over us. By virtue of our union with Christ, God considers us to have performed what Christ performed. Paul said in verse ten that Christ died to sin, and in verses six through eight he said that we died to sin through Christ. Because Christ died, we died! Perhaps a bit hard to understand, but it is nevertheless a biblical fact. Too often the focus of the believer is on what s/he sees and hears in the physical, but the error here is that the apostle Paul clearly tells us not to focus on the earthly, but rather on things above (Colossians 3:2)! I have always liked the following saying.