I will be using the Revised Standard Version (RSV) of the Bible for this Learning Activity.

As I communicate with Christians from around the world I have found a great weakness in many who write to me about their faith – they do not know who they are from God’s perspective! In my view this is quite a tragedy and this Learning Activity attempts to provide new insight into this error and bring about correction.

As a general introduction to the topic I suggest the following. Most Christians view who and what they are from introspection of what they think about themselves and what they need to do to please God. I am calling this approach as “bottom up thinking.” (Please excuse my reference here to placing God as being separated from the believer because you know this web site does not believe that is even remotely the case at all)! The remedy for this malady is to renew the mind to what God has clearly stated about the Christian straight out of the pages of the Scriptures which is God’s perception of who and what you the Christian are from God’s viewpoint. I call this the “top down thinking” viewpoint. It is achieved by reading what God says about believers and taking it as totally truthful, which it factually is!

You may not realize that the Scripture informs us that we were made sinners because we were physically born with a sin nature inherited from Adam. When we believed in Christ our physical bodies were NOT redeemed so we continue to observe sin taking place and this tends to become a focus in our spiritual life.

“For as by the one man’s disobedience (Adam) many were made sinners, so by one man’s obedience (Jesus) many will be made righteous” (Romans 5:19).

I have found that there are some factors that contribute to this lack of awareness as to what God actually thinks about we believers. Fellow shipping with those who have placed themselves under law and a lack of mind renewal taking place in individuals have a large impact on this situation. Very few believers believe that the Law was not even made for believers but rather for unbelievers!

“understanding this, that the law is not laid down for the just (that’s referring to believers) but for the lawless and disobedient, for the ungodly and sinners, for the unholy and profane, for murderers of fathers and murderers of mothers…” (1 Timothy 1:9) (the second part of that passage is NOT referring to believers as you will soon see as you read on in this Learning Activity).

As a Christian you should realize that it is the Law, and the Law alone, that gives sin its power to bring guilt and condemnation upon us.

The Law, which includes the Ten Commandments, is actually called the ministry of death (spiritual death)!

“Now if the dispensation of death, carved in letters on stone, came with such splendor…” (2 Corinthians 3:7).

“For all who rely on the works of the law are under a curse; for it is written, Cursed be every one who does not abide by all things written in the book of the law, and do them” (Galatians 3:10).

You can see clearly from the Galatians passage above that anyone in the New Covenant, in which we live today, who places themselves under the law takes on a totally impossible task if they do so. They must follow every bit of the law while at the same time placing themselves under a curse. There is absolutely no need for any Christian to engage in such a program because Christ redeemed us free from the Law by becoming a curse for us!

“Christ redeemed us from the curse of the law, having become a curse for us–for it is written, Cursed be every one who hangs on a tree” (Galatians 3:13).

The Apostle Paul powerfully states his personal experience with the Law in this manner.

“But sin, finding opportunity in the commandment, wrought in me all kinds of covetousness. Apart from the law sin lies dead” (Romans 7:8).

We can readily see that the Law makes us conscious of our sin when actually under the New Covenant we are told otherwise!

“Otherwise, would they not have ceased to be offered? If the worshipers had once been cleansed, they would no longer have any consciousness of sin” (Hebrews 10:2).

The passage above is referring to the Old Covenant requirement of the human priesthood offering animal sacrifices in a repetitive manner but they could never make the worshiper perfect. The amazing truth we need to see here is that if a worshiper is cleansed (washed, made clean) they would be perfect, and secondly they would not be conscious of the sin committed by the physical body. Those two events are just two of the wonderful provisions that Jesus made for us when He died on the Cross!

“…But you were washed, you were sanctified, you were justified in the name of the Lord Jesus Christ and in the Spirit of our God” (1 Corinthians 6:11).

The passage above states that at the instant of belief you were washed, sanctified and justified! Keep the word sanctified in mind as you read the following.

“For by a single offering (referring to His death on the Cross) he has perfected for all time those who are sanctified” (Hebrews 10:14).

Do you believe what the Bible has said about you in the passages above? If the answer is NO, you need to have your mind renewed to these scriptural facts!

Too many Christians have an incorrect view of the Law. While the Law contains some good moral information and applies to the unbeliever, it cannot make us holy, saved or perfect in God’s view simply because there has only been one person who was ever able to keep all of the law and that person was Jesus Christ. The Law is a schoolmaster (guardian, custodian) to lead us to Christ.

“So that the law was our custodian until Christ came, that we might be justified by faith. But now that faith has come, we are no longer under a custodian” (Galatians 3:24, 25).

We should conclude that the Law gives sin its power, but in Christ we have been set free from the Law and are placed under grace where sin has no dominion over us!

“For sin will have no dominion over you since you are not under law but under grace” (Romans 6:14).

As a Christian you are not to fear God’s wrath because you are under grace in the New Covenant where no sin is counted against you!

“For the law brings wrath, but where there is no law there is no transgression” (Romans 4:15).

Take note of the timing word “now” in the passage below.

“But now we are discharged from the law, dead to that which held us captive, so that we serve not under the old written code but in the new life of the Spirit” (Romans 7:6).

Note the end of the Law in the following.

“For Christ is the end of the law, that every one who has faith may be justified” (Romans 10:4).

In Christ, which is the status of every believer, every sin that is committed, past, present, and future, has been paid for and those believers are completely under the grace that God has provided for believers in the New Covenant. Furthermore, any sin resulting from sins of the body committed by believers are NOT counted against the person.

“and by him (Jesus) every one that believes is freed from everything from which you could not be freed by the law of Moses” (Acts 13:39).

Focusing on the Law will not help you stop sinning in the flesh. Attempts to observe the Law will actually stir up and arouse sin in your flesh. The main reason a person has doubts about God’s forgiveness is they believe the are still under the Law. When they fail, they use the Law to condemn themselves for sinning. The doubt is the result of them looking at their own obedience instead of the obedience of Jesus alone that made us righteous. A clear case of “bottom up thinking” instead of “top down thinking.”

After you have placed your trust in Jesus, you are no longer to be conscious of your sin because His sacrifice was complete and He totally took care of the sin question. The only action that remains is belief! The Law is what gave you a consciousness of sin as an unbeliever. When Christ came to indwell your spirit when you trusted in Him you were taken out from under the Law and placed under grace.

The graphic above attempts to illustrate some of what took place when you first believed in Jesus. His Spirit came to indwell your dead spirit and made it alive eternally. The body was not redeemed and will some day return to dust.

God does not want believers to be conscious of sin which would keep believers in bondage.

“…If the worshipers had once been cleansed, they would no longer have any consciousness of sin” (Hebrews 10:2).

Instead of being sin-conscious we are to be focused on being conscious of our righteousness, forgiveness, etc. as you can study from the three charts that follow below. This is great material for mind renewal. Look up these Scriptures in your Bible. 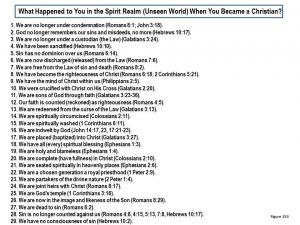 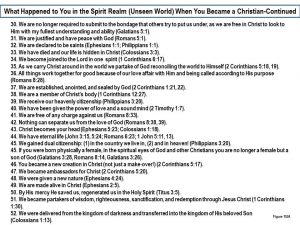 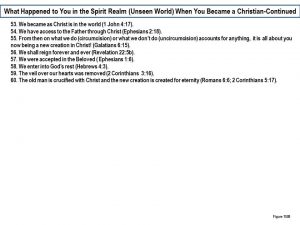 Being focused on sin is blasphemous as it conveys the notion that we do not believe that Jesus actually paid for our sin! Do not go back to the Law in your thoughts or your actions (by self works). God wants believers to believe what He has said about them in the Scriptures which I call “top down thinking.” I think I will end this Learning Activity with one of the top twenty-five passages in the Bible. I would think that less than 25% of those reading and studying the Scriptures have ever run across this passage before today. It is a major mind renewal passage. See what you think.

“I in them and thou in me, that they may become perfectly one, so that the world may know that thou hast sent me and hast loved them even as thou hast loved me” (John 17:23).

Did you know that all believers are one (our oneness is not in doctrine but in Christ!). But even greater is the statement that Jesus made saying that Father God loves we believers as much as Father God loves His Son Jesus! Spend some time meditating about that truthful, biblical, fact!

For those reading this Learning Activity who are  thinking, but Ed you have ignored this passage or that passage in Scripture that says we believers need to do this or that in order to be a good biblical Christian. I would like you to consider these facts. Much of the New Testament was written during the transition period during the first century when both the Old and the New Covenants were in effect at the same time. The Old was passing away and the New was being phased in to its permanent eternal existence. During that time period you must rightly divide the word of God and not drag Old Covenant passages into the 21st century just because they appear in the New Testament. The way in which we resolve this problem of apparent contradiction is by accepting those passages that are in harmony with the biblical characteristics of believers in the New Covenant today and setting aside those passages that contradict the characteristics of the New Covenant believer relegating them to the Old Covenant or transition period of time.