One evening I was shaving and my mind was suddenly filled with two passages of Scripture:

“…there is neither male nor female; for you are all one in Christ Jesus” (Galatians 3:28).

These two passages caused me to focus on what I have observed in the world by the behavior and beliefs that are put forth by people in their prejudicial treatment and views about other people. In specific I thought about such prejudices that are inflicted upon others because of their age, disability, special needs, gender, marital status, nationality, skin color, race, ethnicity, religion and politics. Before this event took place in my life I always knew that God was very clear that He loved and died for ALL humanity, but it never occurred to me that the Scriptures even spoke about how a Christian is to view other humans insofar as evaluating one person from another by any of these prejudicial acts that we see so often in our culture and have perhaps been a part of ourselves!

My initial focus was directed toward the statement that Paul made with regard to men and women. This differential view is certainly one that we see quite clearly in the culture in which I live in and Christianity is not excepted from this abuse of God’s word. All about us I see examples of women being relegated to second class citizens for no other reason but their gender. In some Christian circles men are even inserted into intermediary positions between women and God by the women being subjected to to the authority of the male in most things and even life decisions.

Left click your mouse on each graphic to enlarge it.

Applied to New Covenant Christian relationships this belief and practice clearly smacks in the face of what the Scripture reveals to us. What then is the proper view to be taken?

In order to understand what we are concerned with in these passages the reader has to be cognizant of the fact that there are two realms at work – the physical realm and the spiritual realm. On the figure above I have placed a vertical line to indicate how I think the passage should be approached. The graphic on the left is related to the physical realm and is in fact a biblical truth insofar as the physical difference of male and female human beings in the physical realm. So we do need to be aware of the physical differences in gender. However, the two circular images below the man and woman indicate the make-up, again biblical, of the two with three concentric circles indicating that each of the two have a human spirit, a soul that consists of mind, will, and emotions, along with a body (the outer circle). The body is physical in substance. The spirit and soul are NOT physical in substance! The items listed there cannot be located by a physician and confined to any body organ or any tissue of the body. You can’t take them out of the person and place them in a container so that you can view them. They are real but not tangible because they are non-material in substance (or should I say have no material substance) as they are a part of the spiritual realm. What is key about this so far is that the 2 Corinthians 5 passage informs us we are not to look at anyone from the body or human point of view and this applies not only to human beings but also to Christ!

The next logical question to be asked might be, how then do we view a human being so that we are not regarding them from a human point of view? The answer is that we do that by regarding them spiritually which is portrayed on the right side of the vertical line on the chart. When we do that we immediately notice that the outer circle of the body, soul, spirit graphic does not have the outer circle on it that represents the physical body. This is a great graphic to help us understand what we consist of in the spiritual realm. We must portray the person in this manner because the Scriptures clearly tell us that the body (the fleshly part of us that we treasure so much in this life) does not go on to eternity future (eternal life). God tells us that He is going to provide us with a glorified body that is compatible with the spiritual realm, but it is not our flesh and blood body. Our present physical body is referred to in 1 Corinthians 15 as a “seed” of our glorified body and the Scripture gives us as an analogy that the glorified body is like a plant that comes from a seed. The glorified body is not at all distinguishable from the seed (it will be very different). 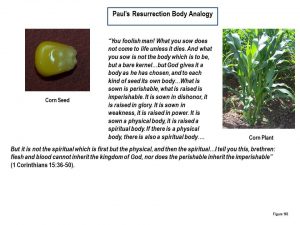 In order to be true to these passages it motivated me to look at each individual in an entirely different manner than earlier in my Christian journey. I now saw all people in just two groups: Those who had eternal life secured by their belief, and those who were currently lost because they had no concept of the spiritual realm and more importantly the God that lives in that realm. For years I had heard from other Christians that the ground around the Cross was level ground and supposedly all of mankind were on equal footing when making their approach to God. But this understanding had never affected my consideration when viewing other people in the world. I was always viewing what I saw in the physical realm and hardly ever by what was the real person in the spiritual realm.

In my particular case I was seriously affected by some very legalistic and distorted teaching late in the 1970’s and early 1980’s. I was hungry to learn more about God and His ways and I heard about a Christian program called the Institute for Basic Youth Conflicts that was conducting a week long seminar at a location relatively close to where I was living. I attended that seminar and unknowingly at that time it was couched in personal responsibility and submission to authority material. During the seminar the visual aid below was one of the central illustrations used to define the biblical arrangement of what was called the biblical authority chain of command for Christianity and the family.

NOTE: The illustration above is a clear distortion of biblical truth and should not be followed by anyone!

The seminar explanation of this family authority chart went along these lines. Christ is over the husband who needs to be in submission to Christ. The wife is under the spiritual covering or protection of the husband and she must be in submission to him. If children are involved, they are in submission to the wife (mother) as would be any other people involved in the operation of the Christian home such as cooks, house cleaners, etc. The role and responsibility of the husband is critical in this scheme of things because if the husband should fall into sin, the sin in effect would cause a hole to develop in the protective umbrella (which they pictured as the spiritual covering) and this would subject the wife and children to spiritual attack along with the husband who had permitted the sin to enter his life. You can see that this arrangement, if true, would place an enormous pressure on the Christian husband, something we have found from the biblical lessons on this web site would be an intolerable situation since there never was a person, including a Christian, who is without sin, with the exception of Jesus Christ (a biblical fact that I did not understand at that time).

Many of the seminar attendees were older single women who had no husband to “spiritually cover” them and the seminar presenter had that covered by stating that in that case a single woman was spiritually protected by her church pastor. Again, we have learned in our studies on this web site that every Christian believer has NO INTERMEDIARIES between them and God. This same fact applies to the umbrella family scheme above with each and every individual being responsible and in the care of God directly and not through human intermediaries! After a week long diet of the above teaching a person, including myself, could be easily become a legalist insofar as their Christianity. It would take a considerable period of time to renew a person’s mind to remove this distorted view of the Christian life.  In the meantime you can see how anyone of the female gender could suffer from such teaching!

Additionally, there was no apparent understanding that Bible passages had to be rightly divided into Old and New Covenant in all of the topics covered in that seminar. A huge mistake in Bible exposition. The content was all predicated on individual works and conformance to Old Covenant Law.

I thank God for delivering me from that phase of my Christian journey into the freedom I later experienced in Christ right up to this day! I might end this by reporting that in 2014 the man who conducted these seminars (over two and one half million people attended a seminar during his career) was removed from his presenting this material due to inappropriate actions toward women he came in contact with.

I think I might end this Learning Activity by saying that I now see just two groups of people in the world. They either have eternal life (are Christians) or they are eternally lost (non-believers)!