In the New Testament the apostle Paul uses a Greek word #3466, musterion, nine times. Those uses occur in the following passages. Here they are as they appear in my Revised Standard Version (RSV) Bible.

“Lest you be wise in your own conceits, I want you to understand this mystery, brethren; a hardening has come upon part of Israel, until the full of the Gentiles come in” (Romans 11:25). I left the word “number” out of this text because it does not appear in the Greek text that I also double check with in my studies. This passage is very often referred to as “The mystery of Israel’s blindness.”

“Lo I tell you a mystery. We shall all not sleep, but we shall all be changed….the dead will be raised imperishable, and we shall be changed” (1 Corinthians 15:51, 52). This mystery can be called believers changing at the Second Coming.

“For he has made known to us in all wisdom and insight the mystery of his will, according to his purpose which he set forth in Christ” (Ephesians 1:9). This mystery is generally called the mystery of God’s will.

“This mystery is a profound one, and I am saying that it refers to Christ and the church (ekklesia) (Ephesians 5:32). This one clearly identifies itself!

“that their hearts may be encouraged as they are knit together in love, to have all the riches of assured understanding and the knowledge of God’s mystery, of Christ” (Colossians 2:2). The mystery of Christ!

The translation of this word, musterion, is provided for us in the Strong’s Concordance as indicated on the following graphic. Take note that Strong’s gives a specific meaning for the word in relation to its use in the New Testament as I have underlined it in red on the graphic. 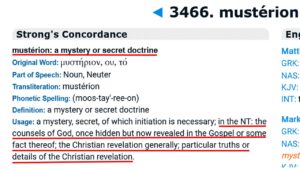 Double left click your mouse to enlarge this graphic.

Let’s take a look at each of these applications of this word to see what we can find out.

1. The Mystery of Israel’s Blindness – This passage is referring to the general reaction of the Nation of Israel, and in specific to the religious leaders of the Jewish religion, to the testimony presented to her people of the arrival of their Messiah and savior, Jesus Christ!

When Jesus came to earth as Jesus of Nazareth the Jews were looking for the long awaited and prophetically promised Messiah who would set up His kingdom on earth and finally solve their oppression from other conquering nations. The Pharisees even asked Jesus about the kingdom so they knew that He was proclaiming Himself to be their Messiah!

But yet in the end the chief priests of the Jewish religion turned their backs on everything that Jesus had told them!

“Now it was the day of preparation of the Passover; it was about the sixth hour. He said to the Jews, Behold your King! They cried out, Away with him, away with him, crucify him! Pilate said to them, Shall I crucify your King? The chief priests answered, We have no king but Caesar. Then he handed him over to them to be crucified”  (John 19:14-16).

Though they could see Him they were blind to who He really was. Now, in the New Covenant, each person must come to Christ via an individual decision placing Christ as their Messiah and God. There are no distinctions made any longer by ethnicity as those have all be done away with according to the apostle Paul.

2. 1 Corinthians 15:51, 52. This passage can be called the mystery of what happened at the Second Coming of Christ. The timing of this activity was the end of the Old Covenant age and the full implementation of the New Covenant. God fully established His kingdom on earth spiritually and did a number of amazing supernatural activities in the spirit realm. In verse 51 Paul writes that “we shall not all sleep.” Sleep is a reference to physical death. When Paul was writing these words, about AD 55,  all of those who had physically died during the Old Covenant were waiting in Sheol/Hades. Eternal life had not yet been determined for them because Christ had not yet died on the Cross. Now Christ would return (His Second Coming, return, Parousia) resurrect those waiting and judge them according to the scripture in Matthew 25:31-46 of the sheep and the goats. Those are the ones who will be “asleep” and will be resurrected for the General Judgment and the sheep received their changed bodies that are compatible with eternal life. At the same time, there were believers on earth who had not yet physically died who would also go through this supernatural change, Paul Himself would be one of those because he was still alive physically. This is also confirmed by verse 52 and 53 which in my Revised Standard Version of the Bible reads: “…and the dead will be raised imperishable, and we shall be changed. For this perishable nature must put on the imperishable, and this mortal nature must put on the imperishable.” Also take note from verse 54 that death is swallowed up in victory! You can tell from this mystery alone that much of the mystery is so because it took place in the spirit realm! This is also the instant that those believers entered (spiritually) into the New Jerusalem as described in Revelation 21:1 – 22:5.

3. Ephesians 1:9-11. This mystery is none other than the plan God had for all of humanity before the foundation of the world! The plan itself is also detailed for us in verse 4 of the same Ephesian chapter. What was that “mystery?” It was that God knew that His created beings would misuse their will and not be able to conform to His standards insofar as sin was concerned. He needed to give us a will in order for our love to be meaningful back to Him and to others in the world. Love could have been without our will but that would make us nothing more than robots or programmed people which is not authentic love. Notice from verse 4 of that chapter that the plan, which He designed, was before the “foundation of the world!” This means the world as we know it was not even created yet nor were Adam & Eve involved! It was God’s design to put another inside of each human being that could result in that human being pleasing to God the Father, and that person to be placed into us was His Son, Jesus Christ! That, according to verse four, would result in us being “holy and blameless” before the Father. What an amazing passage! In verse 10 of Ephesians 1 take note that the plan would be fulfilled “in the fullness of time,” which means that the plan would culminate at the exact time that the Father sent His Son Jesus as Jesus of Nazareth before the foundation of the world! Verse 11 makes it clear that what happened at that time was in full accordance with the counsel of the Father’s will.

4. Ephesians 3:3-6, The Mystery of Christ. In this use of the word mystery by Paul he both challenges us with the word mystery and then proceeds to give us the explanation of what that mystery consists of! In verse 3 Paul states that this mystery was made known to him by revelation and that he had already briefly wrote about it. I see this referring to Galatians 1:16 where he states: “God was pleased to reveal his Son in me, in order that I might preach him among the Gentiles…” In verse 5 of chapter 3 of Ephesians he also states that God had not previously made this revelation to anyone else including the sons of men in other generations but now was being revealed to his holy apostles and prophets by the Spirit! And what was that revelation but what we read in verse 6: “that is, how the Gentiles are fellow heirs, members of the same body, and partakers of the promise in Christ Jesus through the gospel.” That is a powerful statement when we consider that the Jew had been at serious odds with the Gentiles! See the passage Ephesians 2:11-22 for a more complete understanding of the impact this had for both the Jew and the Gentile.

6. 2 Thessalonians 2:7. The Mystery of Lawlessness. Here we have truly a mystery because I have never found an answer as to who this person could have been. From the surrounding text we find that it is a male person, he is lawless, he had supernatural power, and he was already at work when Paul wrote Second Thessalonians which was about AD 50-51. Since this person could not possibly be living today as they would have to be approaching 2000 years of age, I would not be too excited about knowing his identity!

7. Colossians 2:2. The Mystery of Christ. This one is a bit more difficult to determine. My opinion is that although the Messiah was prophesied to come some day to the Jewish people, there was no clear revelation of the extent of the impact of His coming! Primarily, I believe this “hidden part of His coming” was the revelation of grace as it was revealed to the apostle Paul. I also think this is very parallel to #4 above where Paul states that he had “assumed that the Ephesians had heard of the stewardship of God’s grace that was given to me for you….made known to me by revelation…” (Ephesians 3:2, 3). No one previous to Paul had any clue whatsoever of the significance of the appearance of Christ on the world. this is perhaps made clearest by “in whom are hid all the treasures of wisdom and knowledge” (Colossians 2:3).

8. 1 Timothy 3:9. The Mystery of the Faith. Here Paul is addressing Timothy with this passage of scripture. He is telling Timothy to “hold the mystery of the faith.” As those of you who have studied the material on my website already know, I do not believe that the office or title of “deacon” applies to the New Covenant. It did apply during the transition period as I have previously delineated in my writing on this site. Today, in the New Covenant, all of that organization and hierarchy has been displaced by Jesus Christ who is everything about everything! No more intermediaries in Christianity! If the surrounding text is considered we can see that Paul is saying that Timothy must have a confession that is from a clear conscience without lying or distortion. Paul stresses the importance of following the conscience as guided by God who lives within us! This is also emphasized by other statements by Paul: 1 Timothy 1:5, 19, and 4:2.

9. 1 Timothy 3:16. The Mystery of our Religion. This mystery is clearly defined for us in the balance of this verse. In my Revised Standard Version of the Bible the word that defines who is being spoken of is the word “He.” Other translations use the word “Who,” others read “God,” and still a few others use “Which,” this last one being way off base I think! It is obviously speaking about the great revelation given to Paul by God, and that revelation and this mystery now revealed to us through Paul is “Christ in us, the hope of glory!”

I think this brief study on the mysteries of the Bible is helpful in renewing our minds to the overwhelming truth of the critical importance of our understanding all that God will show to us about His Son, Jesus Christ, who He has placed into us to be our only life!