Recently I responded to a five page letter that was sent to me on the topic of Christianity, in general. By the time I finished replying to that communication I thought that the response might be significant enough to share with you on this website so here are some of the details of that response.

The following was my response.

I just finished reading your five page letter written to me that is dated 10-18-22. I am writing back to you because of the details you included in your original letter.

Most people that I communicate with, for the most part, go back to the Garden of Eden and Adam and Eve’s disobedience (sin) when they write to explain Christianity. In your letter you go back to Abraham in your opening sentence which reads: “The blessing of Abraham might come through Christ by His faith.”

Since I began studying the Bible I have concluded that both of the above starting points (the Garden and Abraham) are inadequate and will never lead a person to the central point of the Bible which is stated to us PRIOR to both of the above events. The astonishing fact is that prior to both of those two events FATHER GOD HAD A PLAN!
And that plan is given to us in the Bible!

“even as he (Father God) chose us in him (the word “him” here is referring to Father God’s Son, Jesus Christ, who is also God), before the foundation of the world (that means not only did Father God have this plan before the Garden or before Abraham, but actually before He began His creation work of the heavens and the earth in Genesis 1:1), that we should be holy and blameless before him (Father God). (Ephesians 1:4, RSV).

In that One verse we have THE important PLAN God Had for His creation!

Of critical importance in that verse is the meaning of the phrase: “…that we should be holy and blameless before him.” What is the connection between Father God planning to put His Son, Jesus Christ, in us? The obvious answer to me is that it was impossible for us to be holy and blameless before him” except to place His perfect, sinless, holy and righteous Son in us in place of we ourselves who He actually crucified with Christ on the Cross of Calvary!

“I have been crucified with Christ; it is no longer I who live, but Christ who lives in me; and the life I now live in the flesh I live by the faith of the Son of God…” (Galatians 2:20).

Having Christ indwelling, living in us, being our only life, is the ONLY way we can be holy, blameless, righteous and PLEASING TO THE FATHER! All else is trivia out on the peripheral of Christianity to this great biblical truth! We must renew our minds to this fact or we will never understand the Bible as New Covenant believers!

In the five page paper sent to me the following Christian topics were mentioned: justification, water baptism, spirit baptism, circumcision, uncircumcision, forgiving our debtors, adoption, faith, the law and pleasing God. All of these are worthy to be studied and we are encouraged to do so by the Bible itself.

“All scripture is inspired by God and profitable for teaching, for reproof, for correction, and for training in righteousness” (2 Timothy 3:16).

But all of those are not the main point of the Bible for New Covenant believers! The apostle Paul gives us two great areas of emphasis: (1) For I decided to know nothing among you except Jesus Christ and him crucified” (1 Corinthians 2:2). (2) The second is Paul’s numerous mentions of Christ indwelling the believer as can be seen from the following graphic. These two items are the focus of the New Covenant believer! 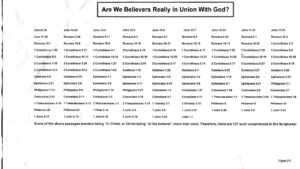 Double click the left button on your mouse to enlarge the chart above.