The End of the Age

In Position Paper #1 we introduced an interchange of communication that took place between Jesus and His disciples which is recorded in Matthew, Chapter 24. In that exchange, the disciples came to Jesus privately and asked Him: “Tell us, when shall these things be? and what shall be the sign of thy coming [parousia], and the end of the age?” In this Position Paper we shall attempt to define in clear terms what it was that the disciples were referring to when they used the expression, “…the end of the age.”

The phrase, “the end of the age,” appears in the Matthew 24 text in verse three. The translation in the Old KJV is an unfortunate one as it renders the Koine Greek word “aion” as “world” when it should be translated as “age.”

As a starting point, we can assume that if the disciples were asking Jesus about when a particular “age” was to end, then it follows as a strong possibility that when the one age ended that some new age would then begin to replace the one that had just ended. Matthew 24: 3, however, would not give us conclusive proof of the “at least two ages” concept.

Hebrews 6:5 clearly announces a new age to come which was yet future to the Hebrew writer at the time the document was written by stating, “And have tasted the good word of God, and the powers of the world [age] to come.” Therefore, we are clearly dealing with a question of two “ages” in this study. It is imperative that we today realize that the age that wasa future at the time of the book of Hebrews was being written is now in the past for us today.

Moving on to Hebrews 9:26 we discover still another important aspect of these two ages. From the context of Hebrews 9:26 we find that the end of the first age can be characterized by its having in its closing moments the crucifixion and death of Jesus Christ. This is made clear to us when we read verses 24 through 28 of that chapter.

At this point, it might be good to summarize what we have learned thus far about this subject of the biblical ages.

A. The Bible teaches that there are two ages.

B. The two ages thus far have been described as “this present age” and “the age to come.”

D. Some Bible translations, and particularly the Old KJV, translate “aion” in most places as “world.” This is incorrect as “world” is either the Greek word “kosmos” or “oikoumene.”

The “ages” spoken of above refer to the Jewish idea of separating the time before Messiah from the time after the advent of Messiah. They thought of human history being divided up into these two ages (Thayer’s Greek–English Lexicon of the New Testament, Page 19).

The New Testament writers, and Jesus Himself, considered themselves to be living during the period of time where one age was to end (we are going to see that this age is also known as the Old Covenant), and the ushering in of another age (that we shall see is also known as the New Covenant). Their sense of living in the end of an age did not mean that all history was going to end in their time, but that a new age (covenant) was anticipated to come in.

In the Scriptures, the two ages are contrasted against each other. “This age” is contrasted with “the age to come.” In order to read and understand the Scriptures it is imperative to have a grasp of the use of these expressions and what they mean. An initial examination of these two phrases should lead to the following conclusions. The phrase “age to come” implies that the age spoken of has not yet come and is distinct from whatever the present age entails. It also makes a statement that whatever the “this age” represents, it requires that “this age” has to have an ending to it. Since the “age to come” nowhere in the Scriptures is said to have an end, then the phrase “the last days” in the Scriptures must apply to the end of the “this age” time period or the Old Covenant. The end of the “this age” (Old Covenant) time period then becomes the time when God’s eschatological program of events would be fulfilled. This understanding is portrayed on Figure 1.

On some of my charts and drawings that follow, there is a period of time which I have depicted as AD 30 to AD 70 that needs some explanation. This time period begins with the earthly ministry of Christ which is generally placed at AD 30 (I am aware that there are some small errors in the ancient calendar that can cause this date to be in error. Even with the error, both the beginning and the ending date of this time period would be displaced by the same amount and in the same direction, hence the forty year period would remain the same). This is the time that was prophesied in the Bible as the coming of Messiah to His people the Jews. This is the “last days” of Hebrews 1:1, 2, in which we are told that God now speaks to us not by the prophetic voices of the Old Covenant (the prophets), but by His Son (Jesus of Nazareth). I think Figure 15 might be helpful in giving clarity to this time period. 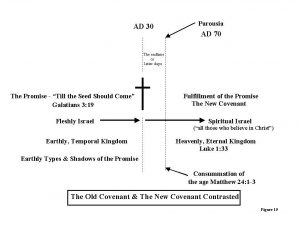 Theologically the Old Covenant (the then present age at the time of writing those words) was done away with at the cross. However, as long as the temple stood in Jerusalem the priests and the people would have gone about the “business” of religion if all of that was not obliterated from the scene. By using the Roman army, God leveled the temple and destroyed the city of Jerusalem along with the temple geneological records that enabled the Jewish priesthood to be continued. All of this was accomplished in AD 70. This accomplished in actuality what had been theologically carried out on the cross approximately forty years earlier–the elimination of the Old Covenant and its replacement with the New Covenant. For more on this see Figure 68.

We can now add some additional summary statements to the list we began earlier in this Position Paper.

E. “This present age” is the Old Covenant and ended theologically at the cross and was completed in actuality at the destruction of Jerusalem in AD 70.

G. “The age to come,” although spoken of as a future event in the Scriptures, was the replacement of the Old Covenant with the New Covenant. This is no longer a “future event” but a present reality in the life of the Christian today, having taken place at the cross and consummated in AD 70.

In closing, we offer Figure 69 as a brief statement of Old Covenant and New Covenant contrasts.